/Blog/Hot-News/Hot-News/1st-Annual-KofC-FSC-Ride-for-Vocations/?link=1&fldKeywords=&fldAuthor=&fldTopic=0
General
The first ever Knights of Columbus Florida State Council Ride for Vocations. Archbishop Wenski and more than 20 Knights on Bikes, motorcycle riders from the dioceses of Miami, Venice, Orlando, St. Augustine and St. Petersburg, convened May 27 2021 in Weston FL...

ON THE ROAD FOR VOCATIONS 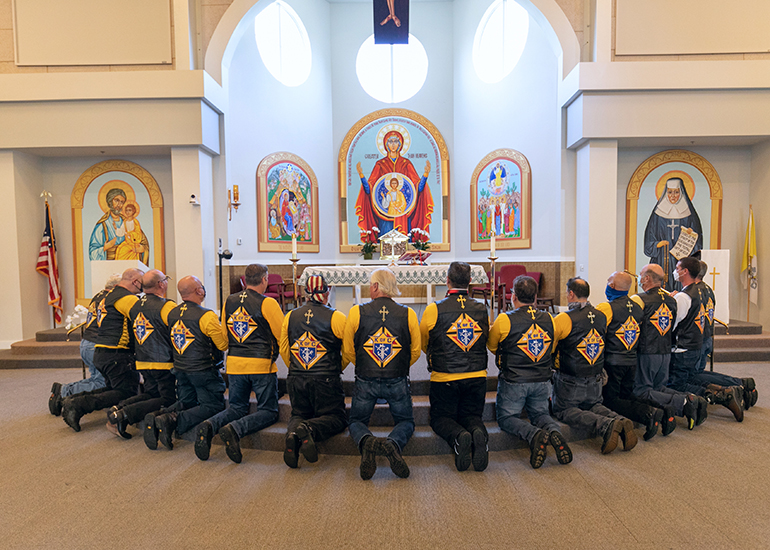 Photographer: TOM TRACY | FC Knights on Bikes pray before the start of the first Knights of Columbus-affiliated Ride for Vocations conducted in Florida and held May 27, 2021 starting at St. Katharine Drexel in Weston. Miami Archbishop Thomas Wenski celebrated a morning Mass and led the ride all the way to the Knights of Columbus Kissimmee Council Hall No. 6624 south of Orlando. All donations benefited Florida seminarians.

WESTON | More than 20 Knights on Bikes, motorcycle riders from the dioceses of Miami, Venice, Orlando, St. Augustine and St. Petersburg, convened May 27 in Weston for their first-ever Ride for Vocations.

Florida’s U.S Route 27 — which begins in Miami and continues north well into the Midwest — offered a rural route for the vocations awareness fundraiser organized by the Knights of Columbus and led by Archbishop Thomas Wenski.

The day began with Mass and a kick-off event at St. Katharine Drexel Parish in far western Broward County, and concluded in Kissimmee, south of Orlando, in time for the start of the Knights of Columbus Florida State Council’s annual convention, where Archbishop Wenski presided at the opening Mass the morning of May 28.

After leaving St. Katharine Drexel, the riders first stopped for lunch and refreshments at the Alligator Alley Harley-Davidson dealership near Weston.

The ride raised money for the Mary Beth O'Connor Holy Angels Memorial Fund for Vocations, which was set up by the Knights' State Deputy, Scott O'Connor, in honor of his wife, who died in January 2020.

“We believe vocations is the best cause there is for the future of the Church, and for young people — for making sure we have enough priests that we need,” said George Gutierrez, a resident of Miramar and Miami archdiocesan chairman of the Knights on Bikes. “All the proceeds from the ride goes to vocations efforts of the Knights of Columbus. It’s all about service.”

Some of the Knights on Bikes had recently traveled to a Knights of Columbus national rally in New Orleans, with 250 motorcycles total participating and one rider coming some 3,000 miles by motorcycle to attend, according to Gutierrez.

“We actually did 33 events during the pandemic year, from doing things like helping to serve food, food deliveries, helping out at parishes and helping direct traffic,” Gutierrez added. “It is a blessing that we have an archbishop who rides with us — and he is a true rider, and when he is with us he becomes one of us, a true brother.”

To don the Knights on Bikes vest, patches and motorcycle “colors,” riders must be members of the Knights of Columbus. The program has been a tool for evangelization among riders who have needed a little encouragement in their Catholic faith, according to Gutierrez.

Ed Sleyzak, communication chairman for the Knights’ Florida State Council and a member of Mary Help of Christians Parish in Tampa, said the May 27 event was originally planned for last year but with the pandemic it had to be postponed.

“Almost every council has a seminarian we sponsor, and we definitely support the priests,” said Sleyzak, who rode in the poker run chase car.

Before stepping onto his own black Harley-Davidson Street Glide, Archbishop Wenski, in his homily, suggested that the riders adopt the faith example of Bartimaeus, the blind beggar cured by Jesus in the Gospels.

“Do we pray like Bartimaeus for sight – to see with faith what God is calling us to? Or do we pray just to win the lottery?” Archbishop Wenski asked. “Lots of people do look for such tangible results for their having put their faith in Jesus. We see this often in the attitude of the adherents of the ‘prosperity gospel’ preached by some of the T.V. evangelists.”

“Bartimaeus remains for us a model of true discipleship. First, because he is not put off by those who tell him to shut up. He kept the door open to faith, even when others wanted to close it for him,” the archbishop said.